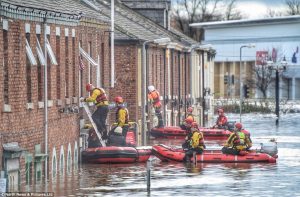 The Flood of Claims keeps Rising

Flooding and the impact that it has on property such as homes, businesses and agricultural land continues to grow in importance. Already there are an estimated five million people living in 2 million properties located within flood risk areas in England & Wales.

The current spate of flooding has raised awareness once gain of the dreadful impact this can have on homes and businesses. The previous wet winter in 2013/14 set new records which unfortunately may yet be beaten.  The damage in  2013/14 was estimated at over £500m, with insurers receiving more than 174,000 claims between 23 December 2013 and 8 January 2014 alone. This time, in Cumbria alone where up to 5,000 households have been affected, it has been calculated that insurers could face bills of up to £325m, with other uninsured damage, such as to roads, pushing the cost to £500m.

Why is there a rising tide of flooding claims?

Historically there was little hope for recovery from flooding claims but the increased incidence and large sums involved has caused the industry to be more inclined towards recovery.  Necessarily, as the economic cost of flood events continues to rise there has been an accompanying rise in those seeking to apportion costs. These claims are both from those directly affected as well as from insurance companies and other third parties. Inevitably the legal process has to determine liability in such cases, making it increasingly important to understand how liability for flooding might arise.

How can an expert witness help in these cases?

The purpose of bringing in an expert witness is to provide not only a subjective opinion based on in-depth flooding specific experience but also to make available some objective science which is based on observable phenomena and presented factually. The basis of the scientific information used by an expert in these cases is hydraulic modelling. It is an important tool for any flood & drainage related expert witness work.

A legal case arises when flooding causes damage to property, land or belongings and there is considered to be fault attributable for the associated costs. An expert’s use of Hydraulic modelling can help determine who if anyone is liable

Generally speaking the defendant in flooding liability cases is usually a local authority, water & Sewerage Company or perhaps the Environment Agency in which case they are quite likely to already have the data they need in the form of an existing calibrated model, as well as having access to the necessary skilled resources.

The claimant however is usually not so fortunate and is much more likely to be disadvantaged by their lack of detailed data and flooding specific knowledge. They are most unlikely to have access to an existing model with off the shelf models available to purchase being extremely expensive. They will need to create a bespoke model for their particular circumstance and to purchase the necessary data. The easiest and best way of achieving this is via the services of a nominated expert such as Richard Allitt Associates.  Solicitors and insurance companies working on behalf of claimants are therefore the most likely to find the services of an expert witness invaluable.

How does Hydraulic Modelling help?

In essence a hydraulic model works by taking all the known information and using this to model predicted outcomes. Essentially hydraulic modelling for legal cases needs a very highly skilled modeller who can test alternative hypotheses and can provide clear plans and visualisations. 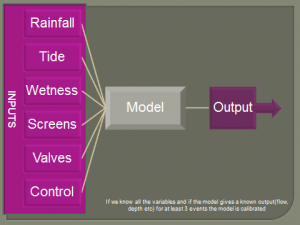 The models can be used for looking at flooding from a variety of different sources such as ponds, rivers, reservoirs as well as from sewers and culverts. It is possible to observe the implications of blockages in outlet pipes and of screens. Whatever cause the claimant thinks is at the root of the flooding incident can be fully tested and modelled to establish whether this was the case. By using their in depth knowledge of the industry and hydraulic modelling techniques the expert witness can provide the legal team with objective scientific information that can clearly determine what has occurred and who is responsible.

Not only can hydraulic models work out what the cause of flooding was, they can establish how severe the consequences of any particular action were. It can produce comparable scenarios for different sets of circumstances. For example a certain level of flooding may have been inevitable but a direct action such as the installation of railings in a park for example can alter both the direction and volume of flooding.

Examples of case studies can be found here

The cost of flooding

By being able to look at a range of different scenarios the expert witness is also able to quantify the extent of the liability involved. By using hydraulic modelling it is possible to model what the situation would have been if a particular action which caused the flooding incident such as erecting railings or closing a valve had not been done. In this way it is possible to actually measure the cost difference between what actually happened and what would have been the situation otherwise. This is an extremely useful way of quantifying the incremental costs of damage.

It is particularly important to establish cost because as the law stands, the only duty owed by a public authority to any member of the public, is not to add to the damages which that person would have suffered had the authority done nothing.

What will an expert do?

As well as carrying out sophisticated modelling work, an expert witness will gather essential data and evidence required to inform the model. Importantly the expert will know what data is required and how best to obtain it.

Richard Allitt Associates also employs the use of its UAVs or ‘drones’ which can carry out aerial surveys. These aerial surveys are extremely useful in being able to identify things such as ‘urban creep’ where hard landscaping has prevented water soaking away leading to flooding, or identifying ditches and embankments which are not observable from ground level.

How to find an expert with the right skills

There are a number of experts who offer flood related services but there are few individuals with the experience of Richard Allitt who is one of the foremost hydraulic modellers in the UK who not only advises the flood & drainage industry but has helped to develop its best practises and industry user guidelines.

The depth and quality of Richard’s experience has seen his services in high demand having acted as an Expert Witness in over 70 cases including some notable ones such as:

In the latter case the judge remarked of Richard:

“I found him to be an impressive witness. His reports and evidence were careful, detailed and to my mind displayed impressive technical command and understanding of the issues.”

In flooding related matters the right expert witness can bring facts and clarity to facilitate the process of law.